Dutch supermarket chain Jumbo is selling several vegetarian and vegan products under their own brand 'Veggie Chef'. They sell all sorts of products, such as meat substitutes, salads and snacks. One of these products is the Sate Schnitzel, which is a lot like a Cordon Bleu, but instead of ham and cheese there is Satay sauce inside. The sauce is based on sunflower seeds and not made of peanuts.

Also very similar to the vegan Cordon Bleu is the huge list of ingredients. But this schnitzel is based on soy protein, which is 50% of the product. Per 100 grams it has 6.8 grams of fats, 19.1 grams carbohydrates, 13.9 grams proteins and 1.53 grams of salt. Compared to the vegan Cordon Bleu the Sate Schnitzel is in my opinion a bit healthier. Mostly because it has a lot less fats and it has about 25% less salt. But still, this isn't a really healthy choice and again it's heavily processed food. So it may be vegan, it's not something that should be on your menu every week if you're doing this for your health.

Very similar to the meat version, just put it in a frying pan with a bunch of oil and turn it from time to time. Use a good and healthy type of oil and do not use too little oil. It's a bit rounded, which makes it less easy to fry evenly. I tried to flatten it a bit while baking, but don't push too hard, or it will start leaking the sauce that's inside. So that happened with my first try, but I'm a quick learner! When ready, it looks tasty, very much like the meat version.

For the taste, I didn't really know what to expect, also because the sauce isn't made of peanuts. But it tastes surprisingly similar to the meat version! Don't get me wrong, the original meat version of this product is most of the time made of very cheap meat and isn't that great. So even though it tastes almost the same, it's just not a really delicious thing. It's more something I would buy if I don't know what else to eat with my veggies and potatoes.

The sauce is what you mostly taste when eating this Sate Schnitzel. The rest of the product doesn't have a lot of taste. Which is probably good, because without the sauce it would probably taste somewhat bland. It wouldn't be completely flavourless, it just wouldn't be a very nice taste. The sauce itself has a mild flavour, it's not the type of Satay Sauce that's very hot.

Well done Jumbo, for making it taste so similar to the original meat version of this product! I definitely choose this one over the Cordon Bleu I ate. Still, it's not a food that makes me very happy. But even if I would eat meat, I don't see the benefits of the meat version of this product. So as a vegan version of a meat product, I consider it really good. And worth mentioning is that it's a tiny bit cheaper than the Cordon Bleu I reviewed. 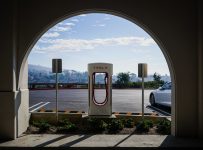 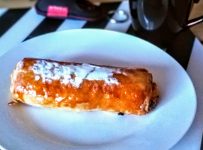